An improved version of this post is cross-posted on the Oasis Digital blog.

At Oasis Digital we are working on an application that will run on a touch-screen computer, and which will be used to (among other things) control an audio amplification system. There are some design considerations for touch-screen applications which are rather stark once you use the touch-screen for a few minutes:

To accomodate the first two of these, I’ve built a prototype/example of a slider control to use for audio adjustment in such an application. It has these key features: 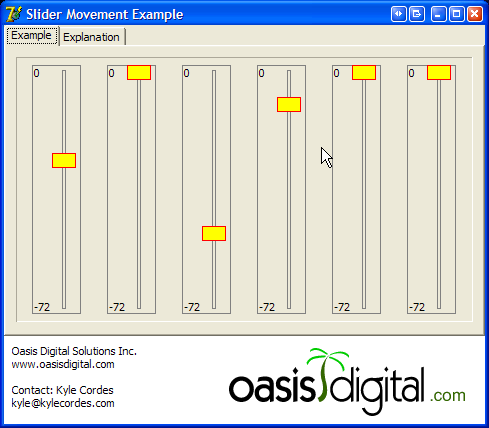 … but ignore the static image, it doesn’t tell the story. To see it in action, take a look at the screencast (currently in a WMV file, easily viewable only on Windows) or download the example program and play with it. The source is also on github.

This example runs on Delphi 2007 (rather old… but I had it handy on the PC at hand), an enhanced version of it in us used in a production application for a touch-screen audio control system. My secondary goal was to use it as a target to create an AJAX control with the same behavior. Anyone want to write that?