I’ve done a fair amount of pair programming over the years. My “Ward Number” is 1, if anyone recognizes the reference. But we pair only occasionally at Oasis Digital. Like Jeff Atwood, we don’t live the pair programming lifestyle. For our particular mix of people and problem spaces, we’ve found the sufficient amount of pairing is roughly a couple of times per week, a couple hours at a time. We’re a partially distributed team, so this often occurs via screen-sharing tools instead of at the same desk.

However, we do something perhaps even more “extreme” than pair programming: we spend a few hours every week programming in larger groups, sometimes as many as three of us in person and a couple more remotely. Why would anyone do that?

Regardless, we encounter an unavoidable issue: it is not pleasant for several people to cram in front of a PC monitor, even a large one, closely enough to read it. We’d rather spread out, particularly for sessions lasting a couple of hours straight.

In the past at other firms I’ve solved this by working in a conference room with a projector. This doesn’t work very well. Most projectors have a maximum native resolution of 1024×768, or occasionally a bit higher, and those with reasonably high resolution are quite expensive. The reward for spending that money is continuous fan noise and an exhaust heat plume blowing on someone sitting on the unlucky side of the table.

This time we went a different direction: our group programming lair features: 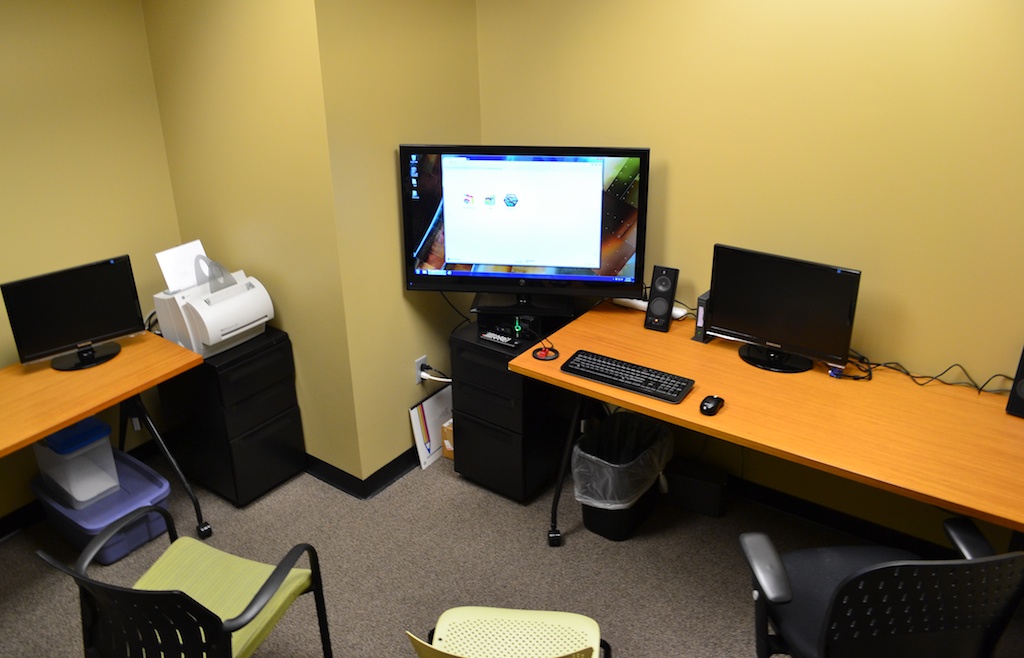 It is very effective. We can comfortably work together in this area for hours, easily reading the screen from 6-8 feet away. (As I write this, I note that the room needs better chairs, a less beige color scheme, a printer that isn’t older than my teenager, and more Apple hardware.)

This approach isn’t for everyone; it requires a willingness to move furniture and buy non-standard equipment. I’d love to hear from anyone else doing something similar. In particular, I wonder how it compares to Pivotal’s setup.